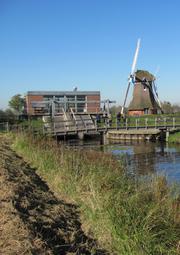 NATURAL SOLUTIONS conducted its first test of the patented prototype Flow Velocity Enhancement System (FVES) in a large, commercial swimming pool in 2003, but it quickly became apparent that the 4-inch unit produced a current that rebounded, making it impossible to measure either the current or the plume.

The next step was biological testing (safety and guidance ability), beginning with the Clatsop

with Coho smolt. The test report, which establishes both safety and guidance, is available.

Once NATURAL SOLUTIONS was ensured that fish would follow the FVES currents without any harm,

we moved on to testing in a larger environment. From 2005 to 2007, we tested our equipment and

processes on Washington state’s Lake Scanewa, then moved to the nearby Cowlitz River.

The efficacy of the FVES for guiding smolts was evaluated in detail in 2008 with funding provided by the Bonneville Power Administration as part of the Northwest Power and Conservation Council's new and innovative funding program. Working with the United States Geological Survey (USGS) out of Cook, Washington, and using 2-D tracking sonic tags and capture nets, the FVES clearly demonstrated an ability to attract and guide migrating juveniles. The August study took place on the Cowlitz River, downstream from the Cowlitz Falls Fish Facility. The report, "Physical and Biological Field Testing of a Flow Velocity Enhancement System (FVES)" by Dr. Charles C. Coutant, Coutant Aquatics (Oak Ridge, Tennessee USA) is available.

In 2009 and 2010, the company developed a practical and efficient riverine trap through the use of telemetry, again on the Cowlitz River in Washington.

In 2011, agencies in the Netherlands contracted NATURAL SOLUTIONS to test effectiveness of the FVES for guiding European eels migrating through canals into nets for transport around damaging pumping stations. Canals are below sea level and water is pumped up into rivers where eels continue migration to the sea. Although the FVES was installed and performed as expected, there were few eels migrating for the planned test. Pictured above is the Caspaar Homes Pumping Station near Groningen, Netherlands.

In 2012, NATURAL SOLUTIONS demonstrated effectiveness of two FVES units for diverting drifting aquatic plants away from the water intake for Dairyland Cooperative’s  Genoa Generating Station #3 on the Mississippi River near LaCrosse, Wisconsin. Clogging of the intake by aquatic weeds is a persistent and costly problem at this facility. The FVES significantly reduced their debris load. The study was funded by the Electric Power Research Institute. An EPRI report is available online at https://www.epri.com for EPRI members and the public.

NATURAL SOLUTIONS personnel have over 700 field days working with and monitoring downstream migrants and hundreds of days in research. Reports are available on the two studies related to safety in training fish to follow the currents and the BPA innovative project in 2008. A partial list of presentations by Gordon Burns or Dr. Chuck Coutant (Coutant Aquatics) follows:

For copies of the research or to initiate a discussion, please contact us at the address, phone numbers or email addresses below.